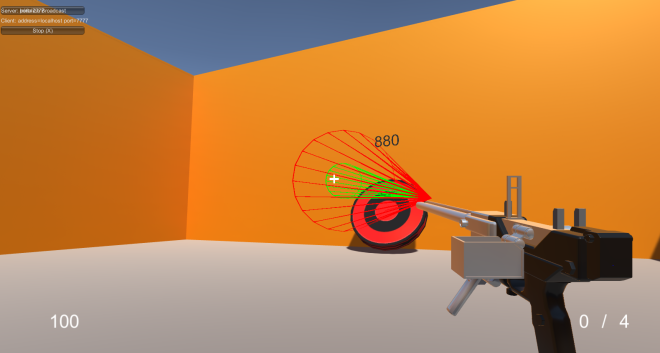 Posted on October 5, 2017 by charlescarucci Posted in Capstone

So this week the Firing Squad was granted safe passage into the Deep Dive phase. Deep Dive is all about getting into the bulk of the research for the game concept we chose to move forward with. I spent a lot of this sprint putting together our Game Design Document that outlines all of the game systems, the mechanics that make up those systems, and how all of those things work together to create the experience we want to deliver to the player.

I know for some designers, the idea of having to put together more documentation is a bummer. However, I happen to love creating a Game Design Document because it gives me a chance to get all of the ideas we’ve discussed as a team and those that still have yet to leave my head, together in one place.

I knew that I had to make sure I documented our new structure for how gun stats work. After watching a really informative GDC talk by  James Everett from Ubisoft Montreal about how they modernized Splinter Cell’s gunplay, James and I decided to change how certain FPS mechanics like spread and recoil work. By shifting to this more complex system, we had to make sure we were accounting for all of the new stat values that weapon parts would change. No longer was recoil a single value. Now, weapon parts can change the amount the gun jumps after firing (recoil amount), how long the gun takes to return to its starting point (recoil time), and/or the recoil curve which determines how the recoil is applied over that time. That isn’t even all of it. Before making these changes, we had 5 stats to take into consideration; now we have 10. While this system is more complicated then what we had before, it feels a lot more polished and makes the gunplay feel more like a modern FPS game which is really exciting. Using the developer tools James made for me, it was really easy to adjust the gun stats to work with this new system and tune them in engine.

I also really wanted to write down some of the features that I’d like to implement in the next phase which is Proof of Concept. A big feature that I’d like to get into the game is a tiered classification system for the weapon parts. I figured, if classify parts as common, rare, or legendary then we can start to define a visual vocabulary to players for them to know the value of each part. This classification system would also help separate how these parts can be found by the player. As of right now, our current prototype just drops weapon parts into the arena from the sky.

As of right now, our current prototype just drops weapon parts into the arena from the sky. I’d really like to implement some more interesting ways for the player to find weapon parts. A few of my ideas involved finding common weapon parts in crates around the map, breaking turret sentries to steal their rare parts, and taking control of a certain area of the map so the cheering audience can grant the player a legendary part.

In addition to putting together the Game Design Document and tuning the stats for every part, I also began making some of the sounds we need for Deep Dive. I started by focusing on sounds that the gun would make, but I quickly got more interested in making sounds that the player character would make. Our players are going to be robots so I tried making a few mechanical sounds for when the player moves. I found a few servo noises, EQ’d them, then threw a compressor and a phaser on to make the servo sound more like a high tech machine moving its parts around. I had a lot of fun figuring out how our character would sound. I looked at a few videos about how Ben Burtt designed the sounds for Wall-E. It was meant to inspire me to make some really unique robot sounds, but mostly it just made me want to watch Wall-E again.