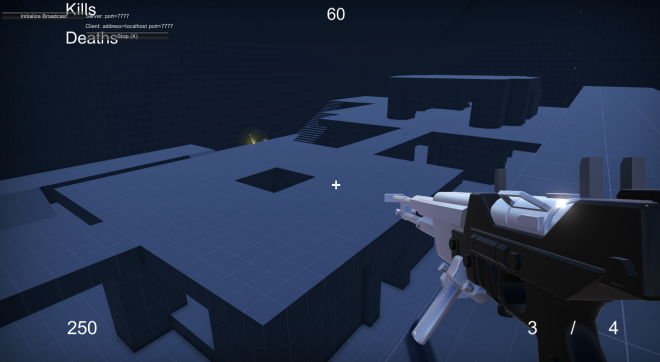 Moving into week 6 the plan was to only focus on a few things before getting ready to challenge Deep Dive. While sprint planning, I already knew I was going to have to assign the damage fall-off values for all of the barrels, grips, and sights since this is a new stat that can be affected by switching parts. I also had to spend a lot of time whiteboxing a new level that would be well suited for matches with more than 2 players. I was excited to put my level design skills to the test.

At the beginning of the sprint, I prioritized setting up damage fall-off so we could test it at QA. James set up new inspector values for fall-off so I could tweak the numbers really easily. Damage fall-off determines how far a weapon can shoot before it starts to lose its damage potential. This means that at a distance, the shotgun barrel is going to do a lot less damage than it would inflict at a close range, while the sniper rifle barrel can shoot targets from very far away and still deal maximum damage. James spent some time putting together a video that shows how this works really well.

Once damage fall-off was handled and ready for QA, I started planning out our new level which will be the one we focus on using for our vertical slice. I knew the level needed to be bigger so we could have more players in the match without the game feeling really crowded. I also wanted to keep in mind some of the feedback I had gotten about the test level I made while planning the new map. Players liked the verticality and wanted more of it. Some of the criticism I received had to do with sections of the map feeling closed off so this time around I knew I wanted to have a more open environment.

I started planning by finding a few reference images from other games and non-game sources. Tyler had suggested looking at other FPS maps like Kill House in Call of Duty 4 and The Pit from Halo 3.

As a team we had also discussed context wise, our game is very similar to Battlebots, just on a larger scale, so I looked into what a Battlebots arena looks like. I also figured since players are supposed to be on a TV show, I would try to find some references of actual TV sets to see if any inspiration would come from there.

The plan was for the level to be contained in a space that is shaped and sized similarly to a football stadium. I wanted the level to be symmetrical from North to South but symmetrical from East to West. This way, the map is already balanced for team game modes (which we plan on implementing in the future) but still provides variation in the geometry so the player doesn’t get bored of the space. Using the Unity Standard Assets level blocking kit I completed the first pass on the new level geometry.  Below are two images of the level. One that is just the gameplay space and the other includes the mock-up of the stadium seating that I threw together for some additional context. 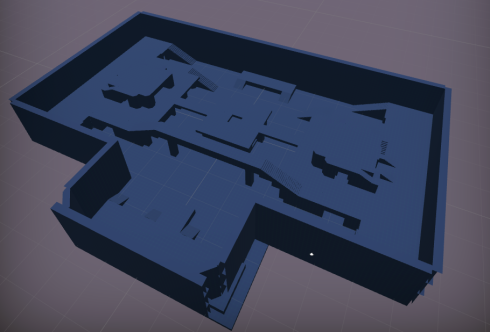 There are a few tweaks I want to make early next week before Tyler starts modeling the necessary structures and adding materials to the surfaces but for the most part, it’s structurally complete. I had a lot of fun working on this map because it reminded me of my days playing around in the Halo forge with my friends in high school. I could honestly build FPS maps all day long.