Posted on September 28, 2017 by charlescarucci Posted in Capstone

Now that we have the core mechanics set up for all 3 prototypes, I spent my time this week setting up all the prototypes to use the test level that I built last sprint, and balancing the amount of enemies that the player would have to encounter in prototypes 1 and 2. I also worked on adjusting the stat changes for a few of the weapon parts we have implemented so far and I worked on writing the concept statements for each of our prototypes.  Basically, my goal for this sprint was to get our prototypes to a more defined state.

I started this sprint by sitting down with James and getting all 3 prototypes to work in the test level I created. James showed me how additive scenes in Unity work and my whole world changed. I was so excited about this new development because now we can separate the level geometry from the gameplay elements. What that means for me, is that we can use one level environment, but easily be able to set up multiple gameplay setups for that one space. That made it really easy for me to start balancing enemies in P1 and P2. It was also really exciting to see the prototypes take place in a real level environment. Below is a video of prototype 1 and prototype 2 in it’s current state (prototype 3 is mulitplayer and I only have one controller so I wasn’t able to capture any footage of that)

Prototypes 1 and 2 are single-player games, so the AI that the player would be fighting against are key components to creating the intended gameplay experience. I started by adjusting the drop weight values for enemy weapon parts in prototype 2. These numbers determine how likely an enemy is to drop certain parts. I decided to set the weight values for the first few enemies that the player would encounter so that they are very likely to drop the one part they have, that the player doesn’t have. This way, the player will encounter new weapon parts right at the beginning of the level instead of getting more of the same pieces. I then moved on to changing the enemy health in prototype 2 so that enemies die quicker but are more frequent in the level, whereas, in prototype 1, enemies are harder to kill but less frequent.

I also got into a discussion this week with my professor about ways to distinguish different enemies and/or the weapon parts they drop (in the case of prototype 2). For prototype 1, it’s important for players to know what weapons enemies have so they can accurately approach the situation. In prototype 2, that enemy distinguishing factor still applies, but it also is necessary so players can easily recognize what parts those enemies will drop. My professor and I discussed a few different ways that we could approach this. For the sake of prototyping, I decided to give enemies that shoot grenades, a new hat design. While these enemies are still completely temporary, I felt that it would be helpful for testing purposes if enemies that shot different projectiles had a clear distinguishing feature. Unfortunately, the new hats weren’t implemented in time for any of our QA sessions this week so we’ll have to wait to see if changing enemy features helps players recognize the difference between projectile types. 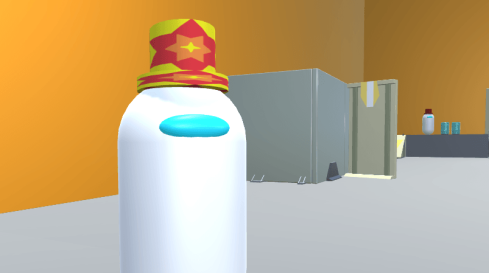 After dealing with balancing enemies, I started working with the new shotgun barrel that James programmed. While I was messing around with the new barrel in combination with the other parts, I started to notice something really interesting. With all of our previous weapon combinations, the sniper scope was always preferred over the iron sights because it reduces the amount of spread on the weapon. However, when I was using the shotgun barrel, I noticed that using the sniper scope meant that my buckshots didn’t spread out as far, making the shotgun barrel less effective. This was the first time a part that was normally considered an upgrade, suddenly didn’t work as well with the other parts. What was exciting for me about this discovery was that I was finally starting to see all the different possibilities that each combination offered.