As part of my advanced seminar during my senior year of college, I practiced my narrative and quest design skills by putting together multiple quest design documents over the course of the semester. Each of the quests below is designed for different types of games, ranging from talk story to AAA action rpg.

This is the first quest the player will engage in, and therefore, their introduction to the game and the world. The quest begins in Wick’s home, where we find him talking with his father, the Mayor of Vaciville. Your dad tells you that the Harvest Festival will be happening this evening, and he’d like your help preparing for the event. Wick is reluctant about having to gather supplies but is excited about the festival. It’s his favorite day of the year.

The player will first be required to collect items from members of the community to get everything ready for the Harvest Festival. While collecting these supplies, Wick is interrupted by an old woman who lives on the outskirts of town, babbling about an ancient evil prophecy. The townspeople dismiss her strange rumors and Wick heads to the center of town for the beginning of the festival. During the festivities, a monstrous beast attacks. Wick takes it upon himself to save innocent townsfolk who appear to be in danger, but he can’t save the town’s librarian whose Eternal Flame has been doused. She is frozen solid.

The quest ends as Wick sneaks around the town at night to discover more about the monster and what happened to the librarian. 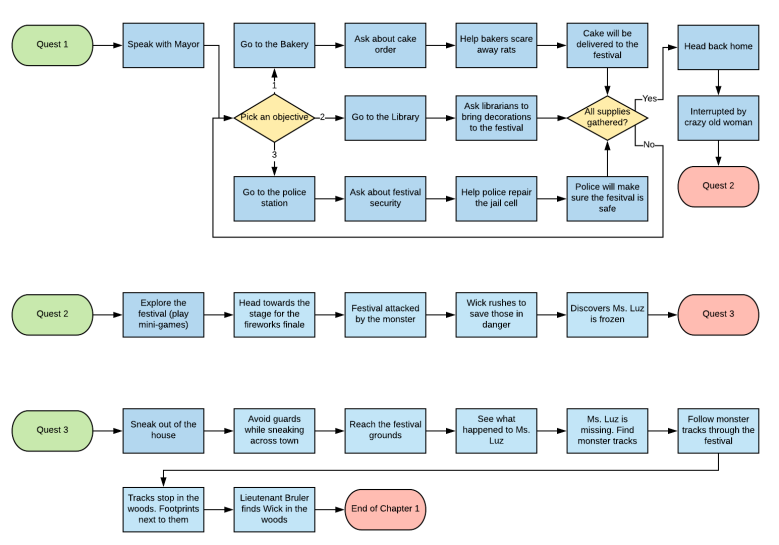 For a complete breakdown of this quest campaign, download the full QDD here: ccarucci_WickQuestChain

Na Kumu is a deserted exotic island where our story takes place. This story will have a tropical cyberpunk setting by combining the natural environment of the island with advanced technology. The whole island is surrounded by calm crystal blue waters that make Na Kumu feel like an isolated paradise. A rocky beach covers the south end of the island, which is where our players will start their journey. The beach leads to a thick jungle that covers most of the island. In the very center of Na Kumu, lies a great active volcano, looming over everything else, producing a cloud of thick smoke that shrouds the entire island in darkness.

For a complete breakdown of this quest campaign, download the full QDD here: ccarucci_NaKumu-talkstory

Return of the Scorpion

This quest can be unlocked after all of the golden path content. The player starts this quest in Alexandria. While exploring the city, the player will come across an old man, crying in the street in front of his house. The old man informs the player that his granddaughter was taken by a gang of cultists. Bayek offers to help the old man find his granddaughter.

From here, the player will head towards the direction the cultists took the granddaughter in. The quest marker is outside of the city. As soon as the player exits the city boundaries, a group of cultists on horseback will ambush them. During this fight, Bayek will notice that the cultists have a red scorpion painted on their chest, the symbol of Serket. It is now clear to both Bayek and the player that the Cult of Serket has returned.

In Bayek’s search for the missing girl, he will discover that this rescue mission was nothing more than a trap and that the Cult of Serket has been hiding in the shadows while Flavius conquered the land, waiting for the right moment to strike back. Their first point of action is to sacrifice the man who stopped them from achieving their destiny in the first place, Bayek himself. They believe that by killing the medjay, Serket will grant the highest members of the cult with her magic, allowing them to take over Egypt while it is still in a vulnerable state.

The quest will conclude with the discovery of the granddaughter’s deceit and an epic illusionary fight between Bayek and Serket herself. 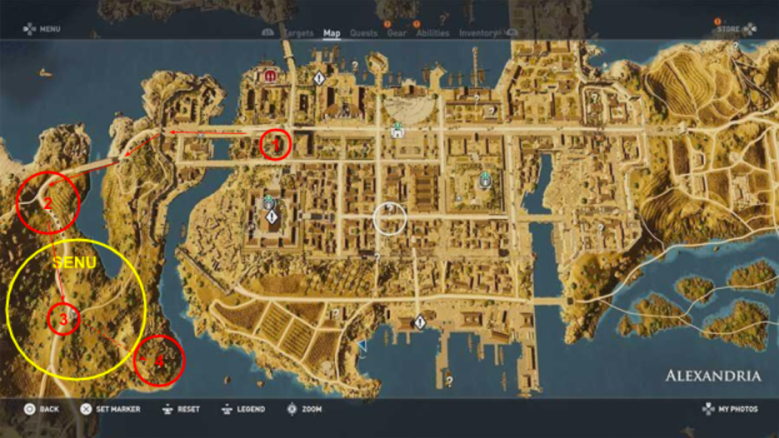 By completing this quest, players are rewarded with a powerful, legendary sword. This is the sword that Kamilah was carrying. It deals very high damage, has average speed and reach, and it has a 40% of poisoning on hit. You also complete this quest with full health because Husani healed you.

For a complete breakdown of this quest campaign, download the full QDD here: ccarucci_ACOquestchain

The Storm is Coming

In this world, civilizations are few and far between. This city, in particular, is a major hub for survivors of a world-wide nuclear war. The war left the earth desolate, created terrible storms, and released ancient dark forces into the world again. In the distance, on the North end of the city, a menacing dust storm can be seen. Purple lighting flashes amongst the dust clouds. It appears to be getting closer.

An older woman, Layla, guards the city at her usual post. After seeing the chaos in the distance, she knows she has to prepare the city for this oncoming storm. But just as she’s about to send word of the danger, she notices a coyote pup, limping toward the gate. The coyote pup transforms into a young girl when she gets close to Layla. Her name is Fay. Fay informs Layla of the evils of the storm. After warning the stubborn governor of the city, Layla is arrested for smuggling an outsider into the city and abandoning her post. After a thrilling escape, Layla and Fay head into the desert to defeat the darkness on the horizon.

The player now has an ally, Fay, who can transform into a coyote whenever she desires. Fay can help attack and distract enemies. As the player progresses, Fay will get stronger in both her coyote and human forms.

The player also now has a new mode of transportation that will be available for them to use for the rest of the game. The Camaro is fast, has been modified with reinforced metal plating, has spiked tires, and runs on solar energy. The car is vulnerable to damage so there will be some points during the game where the player will have to collect resources to repair it.

For a complete breakdown of this quest campaign, download the full QDD here: ccarucci_originalquestchain