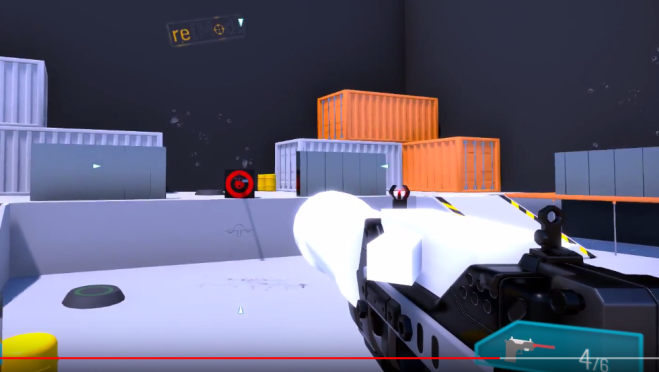 Posted on February 9, 2018 by charlescarucci Posted in Capstone

I’m so excited for this sprint because a lot of really amazing changes are being made along with new content being implemented. We’re officially moving past greenlight and heading towards out Mid-term Milestone. So, this sprint, I’ll be leading the charge by prototyping some new weapon parts that will hopefully bring more variety to every match. Honestly, I couldn’t wait to start implementing these parts so even though it’s only 2 days into this sprint, I’ve already finished all of the prototypes. I really want to show them off so let’s just jump right in.

I want to start this blog post by talking about the 6 new parts that are now in the game. It’s been a long time since we’ve added any new weapon parts and I’m really excited to see players interact with these prototypes. I started prototyping some of these parts last sprint and continued pushing into the beginning of this sprint as well so I could get a majority of the weapon parts that are currently supported on the code side out of the way. So now, we have 3 new barrels, 1 new underbarrel attachment, 1 new sight, and 1 new firing mechanism. My goal is for these parts to start leading players more towards our intended experience. I want players to feel the thrill of discovery when they use these parts for the first time.

This new barrel has a fully automatic firing pattern and a very high rate of fire. However, recoil for this part is significant, but the dispersion is manageable. The Assault Barrel is meant to be a common weapon part that players will be able to find more frequently throughout the map. This way, players who like using fully-automatic weapons will have an option available to them at all times, instead of having to fight for a Minigun Barrel.

The name of this part says it all. This barrel will turn any weapon combination into a classic semi-automatic rifle. Players with a quick trigger finger will make good use out of this barrel. One thing to be aware of is that this barrel provides a smaller clip size so players should be careful about conserving their shots. Once we have headshots implemented, I’m certain this barrel will be a crowd favorite.

This is one of our new legendary parts. The magnetic grip removes almost all recoil from any gun combination. This means, players could be using the minigun rocket launcher, which is known for having very unforgiving recoil, but with the magnetic grip attachment, players will be able to mow down their enemies with ease.

The Blast Barrel is a lot of fun. It’s now our 4th legendary part available to players. The Blast Barrel is a very large weapon barrel that fires a significant number of projectiles or hit-scans with every shot. It’s almost like 3 shotguns stuffed together. The Blast Barrel can deal some terrible damage, so if you see another player with this part on the end of their gun, you better get as far away as possible.

I spent some time this week looking into sight variants in other popular FPS games. I found that the Reflex Sight in Call of Duty has made an appearance in almost every game in the franchise. I decided to create a reflex sight for our game so it could act as a cheap sight attachment that provides players with noticeably more accuracy. With the reflex sight, weapon dispersion is corraled making any weapon combination more efficient.

This is the first new mechanism that we’ve made in a while. The Arrow mechanism fires sharp projectiles very quickly and deals a lot of damage, but it requires players to be very accurate. Without a very small dispersion range, players will find that their arrows might not always hit their target. Fortunately, there are a number of other attachments available to help players control their arrows better.

I can’t wait to see what feedback we get from QA about these parts. Until next time!