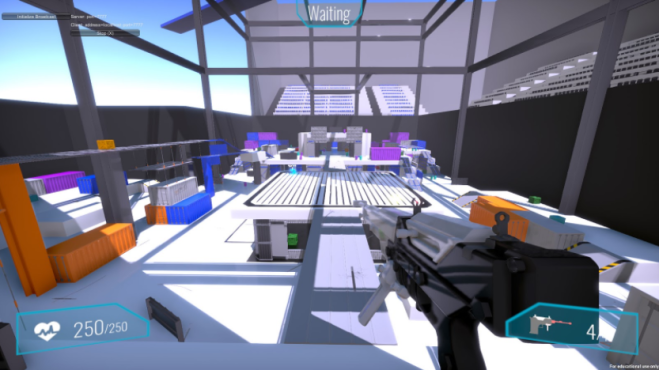 It’s crazy thinking about how we’re nearing the end of capstone pre-production. We have only 1 full sprint left until the mid-year presentations so this week we focused a lot on our visual appeal and a few feedback details. I spent most of my time, creating UI assets and editing our sound effects so that our Vertical Slice would be in a more finalized state. The changes that our game has gone through this week are INSANE but makes it look and feel so much better.

One of the requirements to challenge Vertical Slice is to have all audio implemented. Since I’ve been acting as the audio designer this semester, I made sure to get all of the sound effects that I’ve been working on in this week.

Once James set up FMOD as our audio engine, getting audio to sound exactly how I want it to sound in the game got so much easier. I was able to get complimentary player movement sounds in for using the magnet arm and going into ADS. I also edited the player movement sound to sit in the background more and added more clinks and clangs to reflect the machinery of the robot moving around. In addition to that, I was able to change the plink sound that plays when a player shoots another player or turret to be Mono instead of Stereo; this way the player will always be able to hear if they successfully damage their enemies. Finally, I was also able to get some of the announcer lines in to add some flavor to every match.

In addition to my audio work, I also updated all of our UI and HUD elements so colors and shapes were consistent. I also needed to re-work our gun stat UI to be easier to read during our fast gameplay. I definitely don’t consider myself to be a strong UI designer, but I think what I’ve come up with for our game fits really well. I wanted to make our UI elements seem like part of the robot’s vision so all of the panels are in a perspective view.

A big challenge I faced this week was coming up with a way to show the weapon’s durability. What I did was create white silhouettes for each of the weapon parts we have so far and as the player modifies their weapon, the image displayed in the bottom right corner updates. As the durability decreases on a part, the pieces will start to turn red until they break.

My last UI task was to figure out how we can make players more aware of the stage areas when they spawn. My solution to this problem was to look at games like Halo and Overwatch to see how they use waypoints to guide players toward capture points. I created a pointer asset that would display on the edges of the player’s screen and point in the direction of a stage. I made a second version of this asset that would hover over a stage area in the world space if the player has a stage in view. QA showed that just having this simple element implemented made players more aware of stage areas and we found people tried to capture them a lot more this sprint. Below you’ll find a few images of all of the UI assets we have currently and the mock-up I put together in Photoshop for reference.

In our current version of the game, the gun part UI has moved from the top left side of the screen to the bottom right. By making this adjustment, all UI involving weaponry is on the right side and parts are no longer covered by a UI element when the player is holding them in their left hand which has been a lot more well-received by players.

As we finish this sprint, we are beginning to develop our final presentation for the senior show. Max went through all of our builds and took screenshots to show off the major changes our game has gone through this semester. I’ve included a slideshow of these images below, for your interest.

It’s amazing seeing how far our game has come and I feel proud of everything we’ve able to accomplish as a team. What’s funny to think about is how when we started the semester, our plan was to either make a prison escape stealth game or an arena western shooter. But now, we have re[Mod] and I couldn’t be happier working on this project. I look forward to showing off our game to everyone in just a week and a half.

PS – Max put together this video to showcase our game and inform players about what re[Mod] is before playing and I wanted to include it here. I strongly recommend watching to see what our game is all about.