Posted on May 15, 2016January 31, 2017 by charlescarucci Posted in UncategorizedTagged Featured

For my final project in my Production 1 class I worked with Cole Kirkpatrick (artist), Duncan Carroll (programmer), and Paul Klimaszewski (designer) and we were tasked with making a mobile specific game. We had to include mechanics that were mobile compatible and work in weekly sprint cycles for about 6 weeks. In my team’s game, Retreat!, your army is retreating from battle to seek refuge behind the walls of your safe, well-defended kingdom; the only problem is your kingdom’s defenses are too efficient. Players have to use the touch screen to drag layers of deadly defenses to let your troops in safely, while keeping enemies from breaching your perimeters.

This game started with a circular landscape layout. The original context was about letting spaceships into a planet’s atmosphere by moving layers of asteroids, moons, and rings around. However, because we were using the agile development method, we made changes every week to explore different options and see how we could make the game better.

The first change we made was the context of the game. Cole pointed out that sci-fi/space themes are a little over done and even though contextually it would make a lot of sense, something different might be more interesting. So we decided to throw out the space context and changed it to a humorous medieval theme. After that, we were on to gameplay changes. 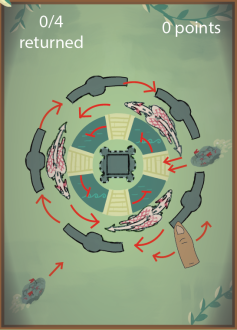 We started by coming up with three different layouts/control schemes. The first one we made was a radial layout with direct contact controls (left). We then made another build with the same layout but a slider control scheme (middle) to see if that gave players better control over the defensive layers. Finally we made a build with the original control scheme but a linear layout (right) to make better use of the screen space. We brought all 3 of these builds to QA Testing and asked our testers what build they thought was the most comfortable and easiest to control. Our results showed that a majority of players liked the linear build the best so we decided to move forward with this layout and control scheme.

Once we had our layout and controls figured out, Paul and I discussed what possible mechanics and features we would want to include. We decided that we wanted to have varying weather affects in the game that would make interacting with certain defensive layers more difficult. Snow would freeze the moat and make moving the bridge impossible. Rain would rust the rails that the guard walls run on making them move a lot slower. The weather can change from wave to wave so we wanted to include a forecast in our UI. This way, players would know what to expect in the next wave so they can plan to use the correct spell when the time comes.

We included the different spells to give players a chance to combat the weather affects that remove their ability to fully control their defenses. The first spell that players can use is the move spell, which allows them to move any of the defensive layers. Once players are introduced to snow, they are also introduced to the salt spell. When players select the salt spell, they can hold their finger down over the moat for a few seconds to thaw the ice and make the bridge movable again. After players experience rain in the game they also get to use the sponge spell. The sponge spell works similarly to the salt spell, except players have to hold it over the guard walls to clean the rust off of the rails. The challenging part of using these spells is that players can’t move defenses when the salt spell or sponge spell is selected. This allowed for more strategy and meaningful player choice in our game.

Along with struggling with the varying weather affects and making use of the different spells available, players also had to deal with a diverse amount of enemy types. Players will encounter 3 different enemy types in the game: basic enemies, chasers, and salamander 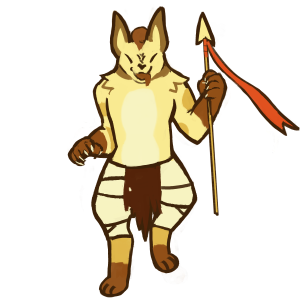 riders. Basic enemies only walk toward the castle in a relatively slow, straight line. Though these enemies are easier to deal with than the other types, they usually travel in large packs. Chasers lock onto any knights that might be in front of them and try to destroy them if they catch up. Chasers are faster than basic enemies but spawn a little less often. Salamander riders only move in a straight line like the basic enemies but they are very fast and can swim through the moat, so players have to use a different defensive layer to take them out.

While blocking out enemies, playing through rain and snow,  and using a multitude of spells players ultimately have to let their own knights back into the castle. Each level has a minimum number of knights that players have to let back into the castle in order to win. Players can exceed that minimum requirement however to get a higher score. Paul and I put together 10 levels for our game. As players progress through the levels the difficulty increases and the seasons change until they reach the final Winter showdown.

Working on this project was a really cool experience. I was really impressed with everything my team was able to accomplish this time around. We all worked really well together and were very dedicated to finishing this game and making it as good as it could be. This is probably the first time I’ve felt like I’ve made an actual game and not just a prototype showing what the game could be.

My team and I are actually planning on completing this game over the summer. We want to polish our mechanics and make some really helpful menu screens. This way our game will look and feel really professional so that we can actually upload it to the Google Play store. Hopefully, we’ll be able to do everything we want to do with this game during our summer break. I’m really excited to keep working on it and I know Cole, Duncan, and Paul are too. We might even add a few more members to our team to get as much done as possible. To be able to release this game would be an incredible milestone for me. It’s actually something that’s been on my bucket list for a while and thinking about crossing that off is really exciting. So look out for Retreat! on the Google Play store hopefully by the end of this summer. Until next time friends!