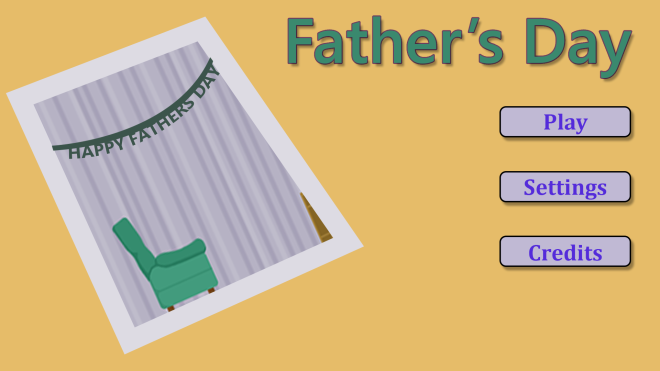 Father’s Day is the second project I completed in my Production 1 class this semester. This game showcases the adventure of a son trying to visit his father on Father’s Day. Ever since Dad got arrested times have been tough so along the way the player has to collect photographs of memories with Dad to give to him as a present. This game is intended to show the strain that incarceration can put on a family.

me was a challenge for me and my other group members. Over the course of 4 weeks I worked with Toby Rosenblum (designer), Tim Chartier (artist), and Zac Taylor (programmer) to make a game that was meant for children ages 6-9 and was supposed to educate players about an under-represented group or subject. My team decided to base our game around incarceration in the United States.

Our game started as a puzzle platformer. The goal was to play as both a father and son character to set up a movie night for the two of them. Halfway through the game the father character was going to be arrested, leaving the son all by himself. So now the player has to set up the movie night again except this time they can only use the son character to complete the same series of puzzles as they did the first time.

After the second week we presented our game to the client and were given a lot of feedback. It appeared that our current game wasn’t conveying the message that we had hoped it would. The client felt that setting up a movie night didn’t show the importance of a Father-Son relationship and suggested that we take a different approach. So we went back to the drawing board and made a lot of changes.

With only two weeks left to finish our game we decided to remove the puzzle aspect and convert the game into more of a basic platformer about visiting the father character at the prison on Father’s Day. The most important changes we made though were the introduction of a mother character and changing the goal to collecting photos of memories with the father character a long the way.

Due to our time constraints our game didn’t have everything that we wanted to. The game lacked sound, dialogue from the mom character, an interior of the prison, a scene with the father character, and any flair. I think we were all just a little disappointed with how this project went; however, we all learned a lot from it. During this project we managed to fully address all of the clients feedback and concerns and at least deliver a playable prototype of our game with all of the core mechanics that we needed. Though, I wish this project had gone a lot differently I am still glad that I got to have this experience so I know in the future to have a very clear message and goal in mind from the beginning to hopefully avoid having to make any major changes halfway through a production cycle.

Once again, I was the Team Leader and one of the designers for this project. So my responsibilities were similar to those of the previous project. However, this time I had to do a lot of research on incarceration and how it affects families to get a better sense of what our game should be talking about. I also had to make use of my skills as a level designer for this project so I could plan out each level and then build them in the Unity engine. 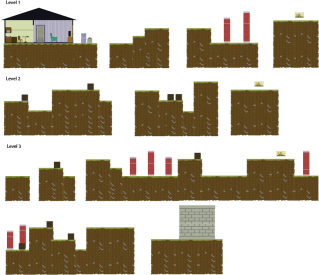 I was also fortunate enough to work closely with Mauro Agnellini, a Management of Creative Media student who showed me a lot about the Producer side of production cycles. I worked with Mauro to make weekly presentations and keep up to date on project tasks for each group member. Mauro helped us figure out a clear goal and message after receiving feedback from the client and led us on a more productive path. Working with him gave me some great insight on how I can be a better Team Leader in the future.